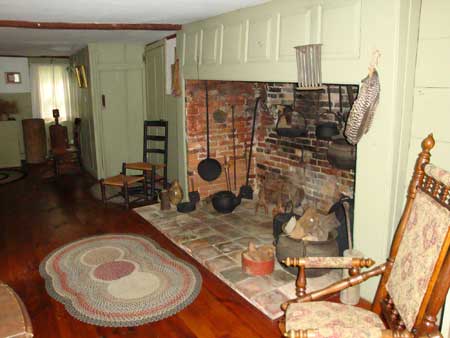 In a 17th century home, the combined kitchen and living space was called the 'keeping room.' Here the food was prepared and served, and daily tasks such as spinning, weaving, mending, and candle making were performed.

On very cold winter nights, the family would even sleep in this room, because it had been warmed all day by the fireplace.

The large keeping room fireplace has two brick ovens and an ashpit. It is surrounded with pots and pans hanging for the fireplace cranes, along with dutch ovens, and other cooking items. The hearth was the center of the family. The work only ended when the daylight was gone.

Other items in the keeping room include a cheese press, a curd basket that separates the curd from the whey for making cheese, and a hornbeam barrel that is made from a tree trunk, used for food storage. 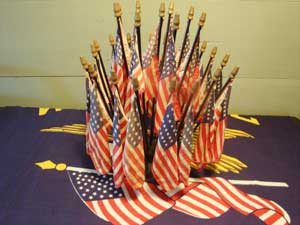 The United States of America has had 27 different flags (left). An additional star being added when a new state joined the Union.