Welcome To Our Virtual Tour Of The Macy-Colby House

The Macy-Colby House was originally built about 1649 by Thomas Macy, the first town clerk of Salisbury, Massachusetts. Macy had originally settled in Salisbury and then moved across the Powow River to what would later become Amesbury. The stone-cellar walls remain from the original Macy house which measured 14' X 24'.

Macy sold this house, barn and property to Anthony Colby in 1654 and moved to a second dwelling uptown. Thomas Macy was constantly at odds with the local Puritan authorities. He finally left Amesbury in 1659, moving his family to the island of Nantucket.

Anthony Colby came to the new world in 1630 with the Winthrop Fleet and had settled in Amesbury by 1654. He was a farmer who was involved in many land transaction that expanded his and his family's holdings. The present saltbox structure was extensively modified by Anthony's great-grandson Obadiah Colby in the early 1740s. Nine generations of Colby descendants lived in this house until 1899 when it was turned into a museum.

The Macy-Colby House is a center entrance, three-bay, colonial saltbox house. There are five fireplaces off one massive, center chimney. There are three rooms downstairs, two bedrooms upstairs, plus a lean-to area that could have been used as a bedroom or as storage area. 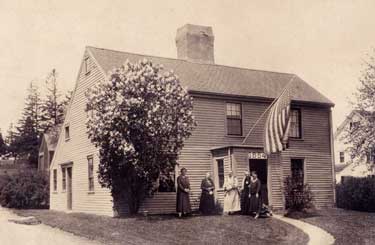 The Daughters of the Revolution

The Daughters of the Revolution

The Macy-Colby House was maintained by the Josiah Bartlett Chapter of the Daughters of the Revolution Organization from 1899 through the early 1980s when the organization disbanded.

Friends of the Macy-Colby House

The volunteer group, the Friends of the Macy-Colby House Committee, now displays and maintains the property, and welcomes all visitors.