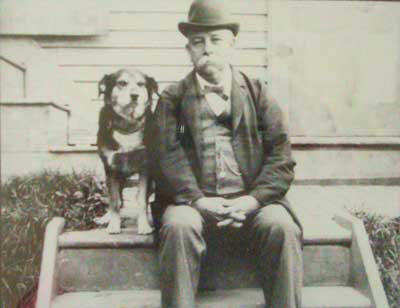 An Enduring Monument to the Colby & Macy Families

In 1899, Moses purchased the Macy-Colby House from his nephew William Colby (1851-1909), son of his late brother Obadiah (1811-1892). He donated the house to the Bartlett Cemetery Association as an enduring monument to the Colby and Macy families.

From a Seafaring Family

His parents had purchased the large, comfortable, Bartlett Place home of Captain William's maternal-grandparents, David and Eleanor (Blaisdell) Merrill, for their family of five sons and two daughters. Captain William was a ship's captain, master of the schooners, The Governor, Daniel and TreatyTwo Brothers.

Moses was educated in Amesbury and went to Boston as a young man, learned the trade of boot making and belonged to a Boston fire company. In 1849, at the age of twenty-seven, Moses went to California, like so many other young men, in search of gold. The trip from Boston to San Francisco took over three months, traveling around the infamous Cape Horn of South America. It is believed he made his fortune, not in gold, but by becoming a shop keeper in San Francisco.

Moses left California in his later years and returned to Amesbury. He remained a bachelor all his life, and was described as having a gentle and retiring disposition; neat and orderly in his habits; square and honest in all his dealings and as a true patriot. Moses Long Colby died on July 16, 1901 at the age of 79 years old and is buried in the Bartlett Cemetery behind the Macy-Colby House.